Who gets be called an Environmentalist?

When you hear the term “environmentalist” what type of person do you automatically picture? For many Americans, the image that’s conjured is one of a well-educated, middle-class white person, according to a new study recently published in the Proceedings of the National Academy of Sciences. Not only do minority groups underestimate their own concern for the environment but the study makes it evident that all Americans underestimate the contributions of people of color to the environmental movement. 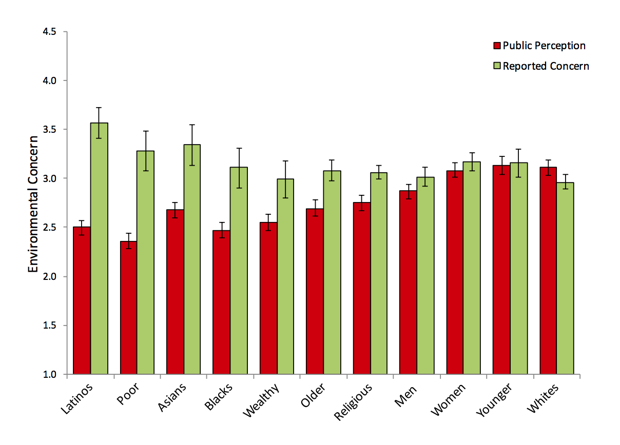 The level of concern reported by minority and poor groups are generally much higher than the public perception. (Pearson et al., PNAS)

As City Lab explained, “when researchers asked participants in the study to rate their own environmental concern on a scale of 1 to 5, with 5 being “extremely concerned,” minority and poorer groups rated themselves on average above a 3 (moderately concerned). Latinos reported the highest level of concern, about 3.5. The averages for white and wealthy groups, meanwhile, hovered just around 3.

And when researchers asked whether they considered themselves environmentalists, roughly two-thirds of Latino and Asian respondents responded positively, compared to only half of white respondents. (Only a third of black respondents associated themselves with that term.) Yet when asked to rate other groups, participants strongly underestimated the level of concern of all demographics except whites, women, and young Americans.” The study noted that its findings point to false beliefs about the environmental concerns of vulnerable populations as a potential impediment to addressing environmental inequities and broadening public participation in environmental decision making.

Why This Matters: Stereotypes that minorities don’t care about the environment lead to serious misrepresentation in environmental groups and also can lead to lapses in policymaking when the concerns of minority communities are overlooked. When fewer people of color are invited to the table to make environmental decisions, our public policy suffers. We recently featured Grist’s interview with Dr. Dorceta Taylor, who published “The State of Diversity in Environmental Organizations” which comprehensively highlighted the lack of diversity in green groups and she explained that “The perception that people of color don’t care about the environment has existed for a long time, and has been debunked for just as long.” Minority communities have made immense contributions to the fight for our planet and it’s critical that they are made a central part of the environmental movement especially since these same groups are disproportionately affected by pollution and climate change.

Interview of the Week: Mike Stanton

The Biden administration is hoping to move the United States into the electric vehicle era through massive investments in incentives to get EVs on the road as well as the build-out of 500,000 EV charging stations across the country. Yet this revolution is reliant upon Americans making the switch to EVs in mass numbers. As […]


Recently, Transportation for America’s Director Beth Osborne sat down to speak with former Transportation Secretary Anthony Foxx (now, Chief Policy Officer at Lyft) about how a massive investment in infrastructure can address inequality and provide innovative transportation solutions for a multitude of communities. From micro mobility, to reassessing freeways, and the expansion of public transit, […]

This week we sat down with Congressman Ted Lieu who represents California’s 33rd Congressional district. His district also happens to be one of the most climate-vulnerable regions in the nation where wildfires, extreme heat, and sea-level rise are creating conditions that necessitate comprehensive climate action from the federal government. More specifically, the Congressman told us […]