Notice: Trying to access array offset on value of type bool in /var/www/wp-content/themes/Divi/includes/builder/functions.php on line 2421
 The Essence of Our Essential Government | Our Daily Planet

The Essence of Our Essential Government

By Monica Medina and Miro Korenha

The government shutdown has been an ordeal but also instructive. It was devastating to government workers, contractors and grantees, who were directly harmed by the failures of our leaders to reach a funding agreement and pay them. But taking a step back, and trying to find any silver lining in this 36-day nightmare, we can see three.

First, the public now sees that government workers, by and large, are dedicated and believe strongly in the importance of public service.   Their willingness to work for days and weeks without pay was impressive to many in the public who do not interact with the federal workforce on a regular basis. The daily media coverage of the shutdown put a spotlight on their fine example of putting country before self. It was particularly gratifying to see public appreciation for government workers in environmental agencies who are usually demonized as regulators or bureaucrats. We are thinking of the people who inspect our food to keep us from getting sick, who pick up the trash and protect the beauty and splendor of our national parks, and the weather forecasters who continued to issue daily forecasts so that we could prepare for blizzards and cold spells and storms.   The stereotype of government workers “phoning it in” – at least for these agencies – seems to have been recognized as “fake news.”

The lack of empathy for the workers and all those impacted by the shutdown conveyed by the woefully out of touch members of the President’s family and Cabinet was equally striking. What the public now knows more acutely than ever before is that a large percentage of the federal workforce lives paycheck to paycheck. They are not getting rich on the taxpayers’ dime – they are, by and large, doing these jobs because they feel a sense of purpose and pride from public service. In addition, the public’s impatience with the shutdown grew as the weeks drew on, putting in sharp relief the lack of awareness among those Trump wealthy “surrogates” like Secretary of Commerce Wilbur Ross for the important ways that the government provides services for a broad swath of Americans who don’t have private jets and trust funds to get them through.

Second, during the shutdown, the weak spots in our federal safety net became more apparent. For example, the shutdown highlighted that our federal food inspection system is woefully underfunded and weak, even when it is at full strength.   Food processing facilities are only inspected once a decade, and high-risk foods are not given much greater attention. Our government research and training programs are similarly run with little excess capacity and no way to make up this lost time. Likewise, government computer systems are old and outdated, and without workers there to keep them operating they failed quickly, risking making basic things, like routine weather forecasts, less reliable. And if anyone doubted the importance of the Coast Guard for keeping us safe here at home, they had to be impressed by those brave “Coasties” (our Heroes of the week on January 11) who continued to risk their lives to save people in danger, even as the ships and equipment they were using was losing its reliability fast. Thirty six days was a breaking point – but what if we had been hit with a real emergency that wiped out a major metropolitan area? We need even more redundancy and resiliency than we currently have built into the government.

Third, we hope that the public now recognizes how much we would all benefit by strengthening the capacity of our government. There is a stark contrast between our military prowess and strength, and the frayed civilian agencies that make do on small staffs using outmoded technology that is holding them back from serving us well, even on the good days. We need to upgrade government services and technology to make us more prosperous, and better protected from forces beyond our control. This is why we have government – to perform functions that are essential to our safety and to maximize the efficiency and sustainability of our economy – to harness our collective power to take actions that we could not manage alone. This shutdown has made even more apparent that we need to do what we have always managed to do in the past – to take our joint enterprise to the next level to meet the challenges that lie ahead so that we can maintain our greatness for future generations of Americans.

We have always been a resourceful and generous people, with a government that reflected our view that we are better when we work together for the common good. Let’s hope that the lasting legacy of this historic shutdown is a new appreciation for our country, its government, and the people who make the government run. 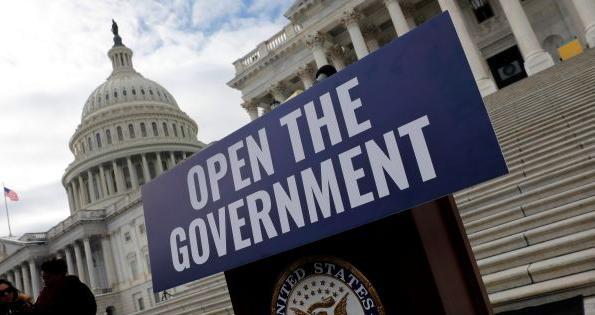